I’m feeling busy!!! So much going on it’s hard for me to sit down for a second and update, but in between my bagel and tea for breakfast I will try to catch ya’ll up! 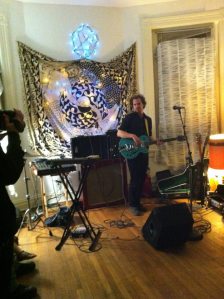 The Richmond show at the 13ainbridge collective last Saturday was a really fun show. My gratitude goes out to all who live there. Not only are they putting on great shows they seemed to be doing amazing things for their neighborhood too. Take some time and check out the blog for the house in the link above. I share the stage with Allie Smith and Kristi Emmons, both from Roanoke as well!! The intimacy of the show was perfect and I would love to play there again very soon. 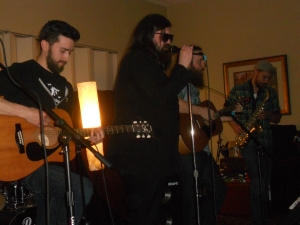 I was asked by Flannel Gurl Records to run sound for a show in Christiansburg on Tuesday. On the bill was my good friends Death Newman (a hard rock tribute to Randy Newman), Group Never (a very abrasive 3 piece with no bass player) and Math the Band (who on tour with Andrew W.K. right now!!!!!). I hitched a ride up there with the Newman boys and had no idea really what to expect.

This was Death Newman’s final show and they did it acoustic and If you haven’t yet go to Swen Together Records and download their album with the full band.

I had never seen Math the Band before and let me tell you, if you get the chance do it! They have so much energy and know how to get the party started. I got a vid for all you lazys.

This weekend is MACRock and while I am not officially playing, I did manage to get on a house show late night Friday with my new pals from Harrisonburg, SURFING and Adam in America. I will be staying the weekend to watch all kinds of bands. I’m sure I’ll have tons of photos and video to share so keep a eye out or get your ass to MACRock!!!